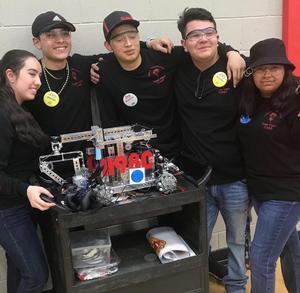 Congratulations to both robotics teams who competed with 24 other teams from AZ, CO, and Mexico at the FIRST AZ State Qualifying Tournament in Queen Creek, AZ.

Team Viper (junior/senior team) finished 11th in regulation play but were selected as alliance partners by the second ranked team. They won their semi-final matches (beating the Lil’ Viper alliance) and went on to win the finals against a very good alliance made up of teams from CO and Mexico. This finished qualified them for the AZ State Tournament at NAU (Flagstaff) during Rodeo weekend!

The Lil’ Vipers (frosh/soph team), finished 4th after 5 regulation matches, giving them a team captain spot in the semi-finals. They played well but were defeated in the semi-finals. This was a fantastic showing for a team that is made up of mostly freshman who were competing in their second tournament ever. The Lil’ Vipers have one more chance two weeks from now to qualify for the AZ State Tournament. With their strong finish in this weekend's tournament, they have a good chance of qualifying.